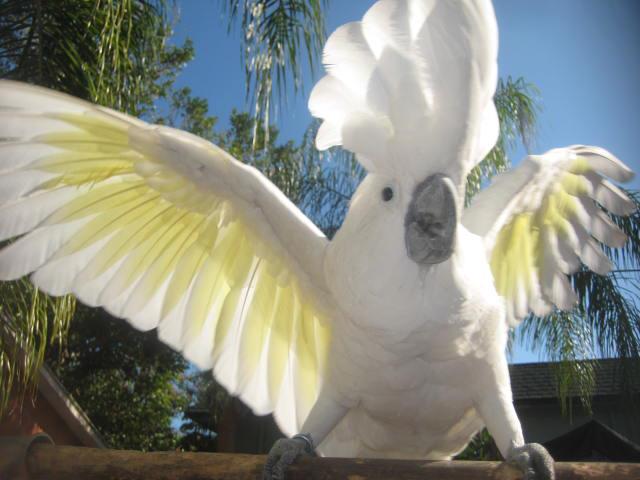 Florida Parrot Rescue M.A.R.S. that we are trying to bring our stories and “yes some M.A.R.S. drama”, bird related that is, to all of you on a more regular basis.

Now if any of you think that is going to be an easy task, well then just think again !!!!!

Yesterday was a good example. Three appointments were set for the day. Parrots were all out. Two volunteers were on deck, David, aka “Red Legs Greaves” and Caleb, oh, and me of course (Lu)

Our clean up routine for this Wednesday we decided, would be a bit less then our usual routine. Realizing now that some avians actually like a little mess to come back inside to, yes I said mess, that of course does not include dirt or poop or spoiled food. For example, our resident Jakers who spent most of his inside time on Tuesday making the perfect windows in his box, then normally, having to do it all over again. He actually laughed when he went back inside, which got the other adoptable birds here at our Florida parrot adoption and rescue sanctuary laughing or imitating laughter and best of all, no screeming came from Jakers, or suprisingly any one else on this day which was an absolute miracle. Silence, as I always say means happy birds, and a very happy Director.

So let’s get back to the day at hand, and another Jakers story, since as he would like, it was all about him this day. A M.A.R.S.visitor was given permission to play with as many Cockatoos or other birds as he liked, he had previously adopted, it did not work out and he was now looking for a better fit. Melbourne Avian Rescue Sanctuary, has a no fault adoption policy. At some point Jake had come down from his tree to get in on the action, lots of playing going on. Ozzie running around like a crazy bird, Karma climbing up to Jakes tree, Big Bird heading up the tree, Stubbs yelling because Big Bird is heading up there. Keiffer yelling cause he wants to play with Oz. You get the idea. I look up and relize Jake is nowhere visible, not even high up in his tree. I do a Lu. Yep, my volunteers know this one. “STOP everything, let’s all look for Jake”, over the fence, out front, just find him please!!!!! BIRD drama just like I promised. 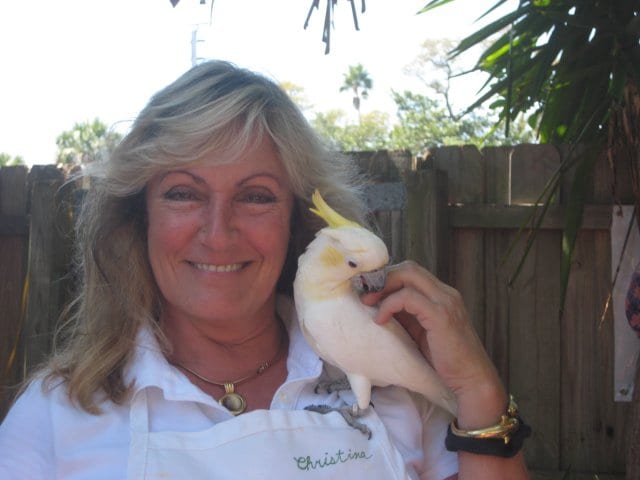 M.A.R.S. just got our lap top back from the Geek Squad. After fumbling through all the programs I needed to add and obviously hoping for the best results I could possibly achieve on my own, well, here we are once again. So please stay tuned for more. You all have alot of catching up to do with all the goings on here at our exotic bird rescue.

It certainly has not been dull. nor have we had much down time at all unlike this lap top,(hahha). Yard sales, we have had at least two. Special events, Our “MOONLIGHT EASTER EGG HUNT”. Adoptions, alot. Happy birds well I sure hope so because we all work really hard to make that happen here at Melbourne Avian Rescue Sanctuary, our Florida based adoption and rescue sanctuary.

Pictures will start being posted once again, yes we will still use our Facebook.com/marsparrots page for most of that and hopefully we can make all of you smile at our progress so far this year. Has there been some drama, well of course! Will we share all? We sure will.

In closing, I must give a huge thank-you to all the volunteers, this was not an easy few months. To all our supporters near and far we continue to be so very greatful to you. Without all of you, our Volunteers and Supporters we could not continue this work.

We will from this point on keep posting regular updates for all of you on Melbourne Avian Rescue Sanctuary. There will be changes to our visitor policy, and a blog post will explain all of it to those who wish to be in the know.

Every once in a while a light bulb goes off in my head, and an idea is formed. Sometimes good ones, sometimes ones that end up in the garbage pail of ideas labeled “what was I thinking”.

This time, I want to share an idea that came into being this past weekend. Two individuals came for a stay here at our Exotic Bird Rescue M.A.R.S.. A bird whisperer and her videographer.They loved the experience of staying here. Their purpose, to work hands on with a few of the less adoptable birds that have come into the rescue. The goal, to get them to the adoptable stage and while doing so create a video of the entire process for their future useage. Then the DVD or a series of DVD’s created will be available for sale. More on this later as it unfolds.

M.A.R.S. is located within walking distance of great beaches and restaurants, community parks and a fishing pier. It is very easy to navigate your way around this beachside town. So I thought why not offer a stay at a working aviary to individuals and families who might want the experience of being at the beach and being around parrots, some hands on helping out so to speak. We of course have a ways to go working out all these details but M.A.R.S. is looking for your feedback and hopefully lots of imput on this idea.

What a way to bring people and parrots together. To learn and share the experience of Melbourne Avian Rescue Sanctuary (M.A.R.S.). If you would please direct your feedback to our contact form we will share ideas and see what plan we can form. I think the time has come to give something like this a try, do you?